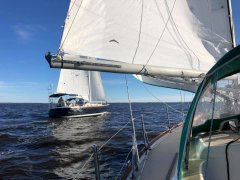 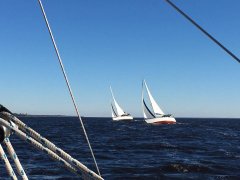 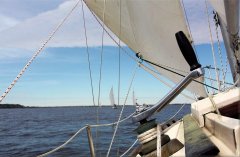 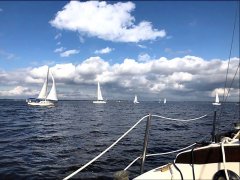 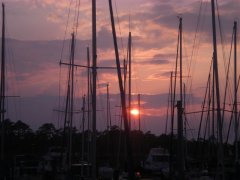 John Walsh was an avid racer along the Neuse River. As a member of FHYC, John conceived the idea of a 22 mile race down to Oriental in 1984. There were 6 boats in the race, and John was the Race Chair, the PRO, and the Committee Boat owner. He would start the race with his bugle and then power down to Oriental to the finish line. The original oar was presented to John in Brightingsea, England in 1971 where his boat was built. The hotel owner threw a going-home party for John and invited everyone who had participated in the evacuation of Dunkirk. They gave John an oar that really had been used in the 1940 evacuation across the English Channel. That oar is today hanging in the hall of the Fairfield Harbour Community Center. 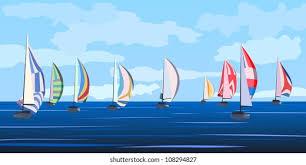 When John died in 2000, the race’s name was changed to the John Walsh Memorial Oar Race. This year May 21, 2022 will be the 38th Oar Race. The winner of the race will have his/her name inscribed on the permanent trophy hanging in the Community Center and will take home a miniature oar trophy.

You may register for Class A (larger faster boats) or Class B (smaller slower boats). First place winners of both classes will received miniature oars. Download the Oar Race NOR under “racing” on fhyc.us/fhyc – no password needed.  Registration is $10 per ticket.

There will be an award ceremony after the race at Russ & Barb Robinson’s home with a “potluck to share” party at 5:00 pm. More info in the NOR/SI.

Our Planning Committee Report has been published in the members area. Please login to view.

Full 2022 Calendar including Social, Board & General Meetings can be found here or clink on the Calendar Menu Item above

Please contact the IT Committee, and we will publish here!

JSN Epic is designed by JoomlaShine.com